Did you know that right here, in our backyard, we get to call the nation’s longest-running children’s theatre Nashville’s very own? Hip hip hooray for The Nashville Children’s Theatre (NCT)!

The Nashville Children’s Theatre has been staging productions since 1931 thanks to an effort by the Junior League of Nashville and has been performing in its current space since 1960, with a renovation recently completed in 2007. It is a not-for-profit charitable organization that reaches “more than 90,000 annually”, according to their website.

We went to our first NCT show in August of 2018 for a performance of Twinkle, Twinkle, Little Star at the Copeland Studio Theatre. This performance was part of a new series called The NCT Snuggery: Theatre for the Very Young. The Snuggery programming is “designed to overcome age, language and development barriers” and “is a safe environment for focus and creative thinking to be nurtured, or even discovered for the first time!” There is a helpful privacy suite close to the Copeland Studio Theatre with comfortable chairs and a changing table in the building where you can go with the youngest of the bunch to nurse, feed, diaper change or just soothe away from the crowd. Kids under 2 years of age are usually free at non-Snuggery shows but all individuals attending a Snuggery show just pay $10 for a ticket – a steep discount from non-Snuggery ticket prices (ranging from $15-$21 depending on any eligible discounts (Military, Educator, Senior and College Student)). 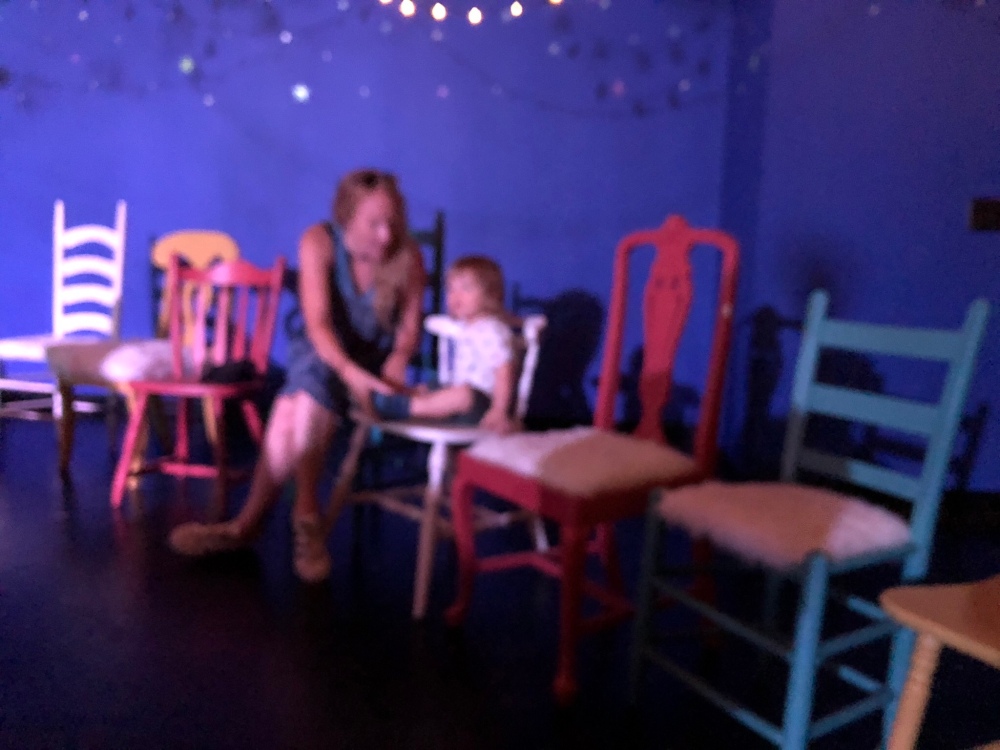 Twinkle took place in a space many would be familiar calling a black box theatre – a variety of chairs, benches and pillows were available for seating with the littles encouraged to sit right on the floor in front of the performance area. The performance was short – maybe 30 minutes? – and highly interactive. It even began out in the lobby so that the littles would become engaged before marching into the theatre space and spend the time waiting for the show to begin in anticipation of the performance to come. The littles are encouraged throughout the show, and in various ways, to help two starkeepers in their quest to find missing little star with props, movement and vocal participation. Littlest was *enthralled*, to put it simply. Though she’s not much of a performer, particularly around unfamiliar faces, she was happy to interact with the props and get up and dance with her Dada when it was time to celebrate.

The show page for Twinkle, Twinkle, Little Star also curated a great list of activities to extend the experience and learning outside the Theatre. The activities included a recommended playlist with stellar themes, creating a sticker star constellation and making magic star wands. We did a lot of singing of Twinkle Twinkle Little Star and played hide and seek/peek-a-boo with stars we shaped out of dough for weeks after the show.

Why I am finally getting around to writing another blog post, though, is because of the most recent performance we attended at NCT – just two weekends ago, March 2019. We returned to the building on Middleton Street to watch The Very Hungry Caterpillar – which is really a play made up of four shorter performances. It begins with Brown Bear, Brown Bear (one of our earliest and one of our longest readloud favorites, especially thanks to Mr. Andrew from the Inglewood Library’s Wonder Baby program) which is then followed by Mister Seahorse, The Very Lonely Firefly and wraps up with the title piece – The Very Hungry Caterpillar. Though we personally were only familiar with the first and last stories written and illustrated by Eric Carle, Littlest loved the middle two performances so much we will be adding those books to our home library shelves soon! 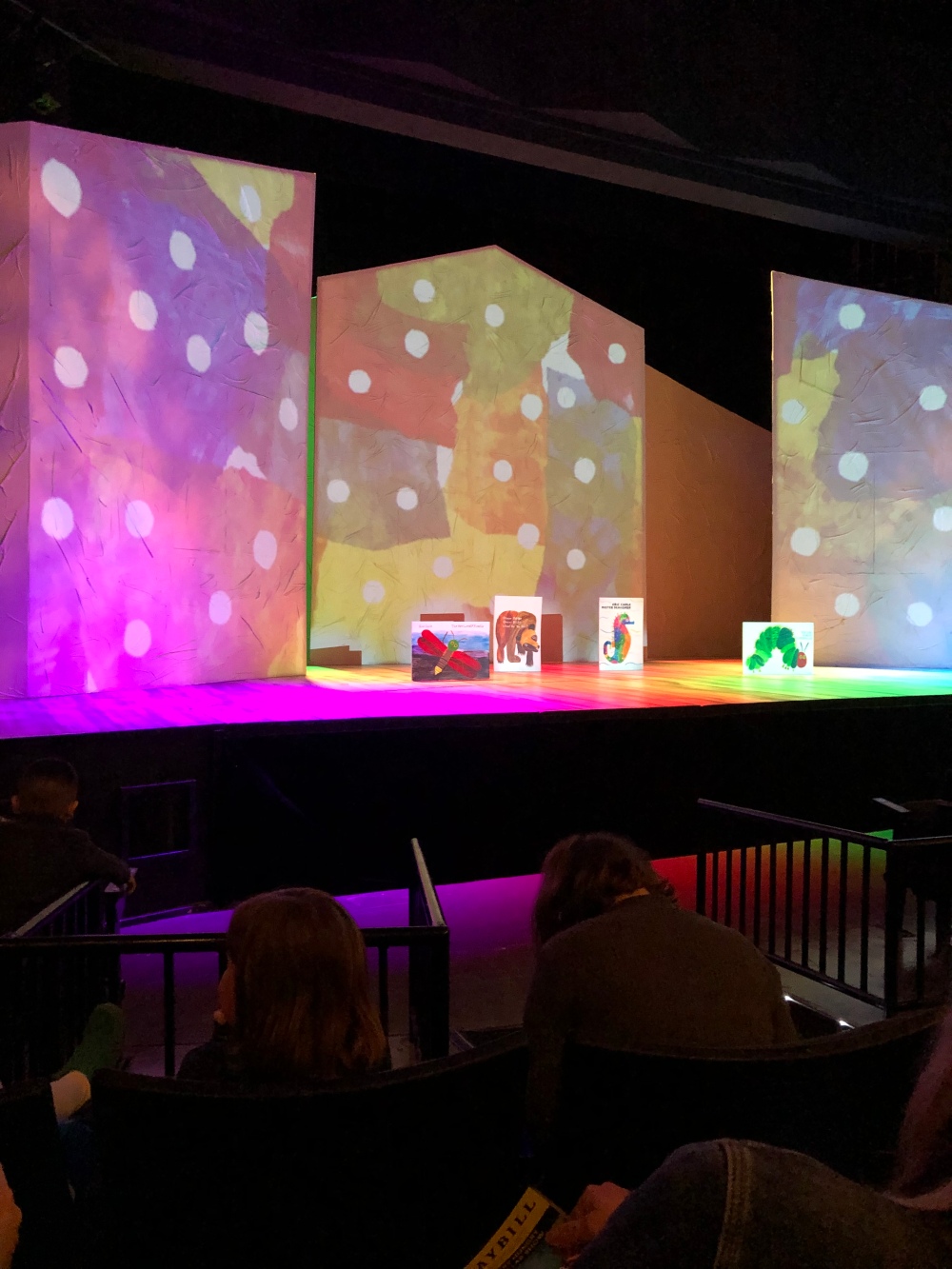 There are only TWO more weekends of this show so please, consider getting tickets soon/now so you can enjoy this performance before it closes!

This performance takes place in the Hill Theatre (named for benefactors George R. And Ann Stahlman Hill) which seats 540 people. The seats are adult sized (perk!) and are quite comfortable. There is also a Comfort Room at the back of the Hill Theatre with adjustable light and sound so you can still follow along with the performance while tending to your littlest’s needs.

As a former teacher and parent, I personally find great value in the various tips and resources the NCT team makes an effort to share on their website for every show. The “Themes for Social and Emotional Learning” for The Very Hungry Caterpillar included “creativity, teamwork, perseverance, friendliness, helping, hard work.” While I won’t be creating lesson plans and activities centering on these themes post-performance I am making an effort to introduce these vocabulary words in conversation with Littlest when recalling the show as well as while talking about other subjects. The only other note for this very kiddo- and sensory-friendly show was that “this production uses 75 puppets, many of which are very large.”

The puppets. The puppets! I, as a nearly-40-year old, was probably equally as thrilled and engaged as Littlest was throughout all four mini performances because of these puppets and the puppeteers. The colors were bright and stunning, the visuals perfectly approachable without sensory overload – and the soundtrack whimsical and bright. The puppeteers, Isabella Karina Coelho, DéYonté Jenkins and Kristin McCalley, all recite while manipulating puppets that galumph across the stage, peek out of windows and seemingly float through an underwater world. They were phenomenal. There is an opportunity to line up after the performance to meet the actors, have your playbill autographed by them and pose for a picture with the puppet – highly recommend this. We initially were about to walk out the door to our cars with our friends but Littlest was just not ready for her theatre experience to be over so we lingered in the lobby. It was then that we noticed the set up for the meet + greet and decided to push our luck and join the line. Littlest, normally shy, was even willing to hop up on the bench and perch next to the puppet masters and their furry little friend. 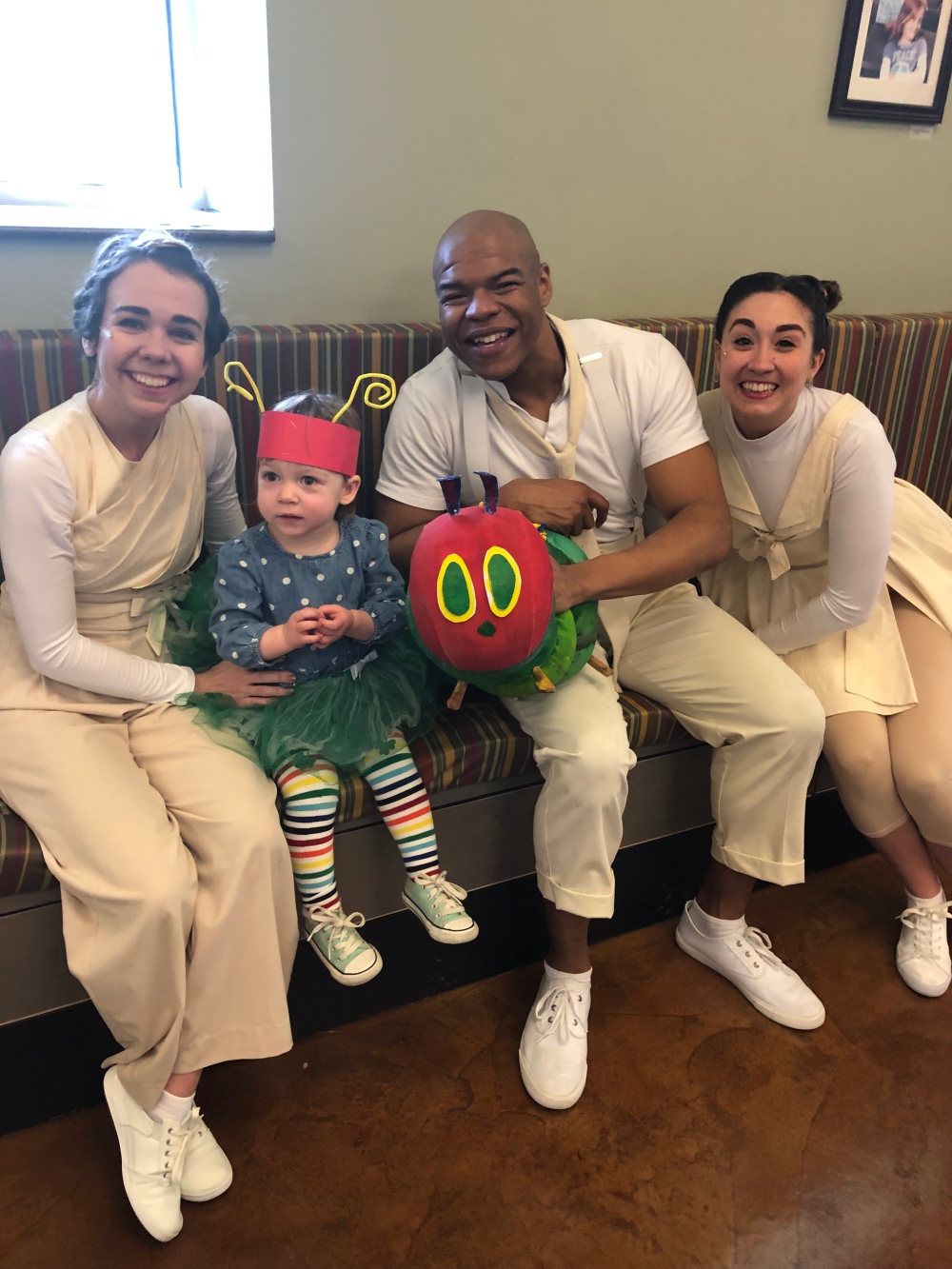 Before the show we were able to create our own caterpillar headband and play some caterpillar-themed games (matching photos of Eric Carle’s iconic illustrations from the stories presented in the performance, for example) before finding our seats. These pre-show activities typically begin up to one hour prior to a performance’s start time in the lobby of the theatre building. This time was perfect for Littlest and her 2 year old pals to get some wiggles out before sitting in their theatre seats. When the weather is nice, the small green space surrounding the NCT dragon mascot outside of the building is another wonderful place to run, play and be active before settling in for a performance. 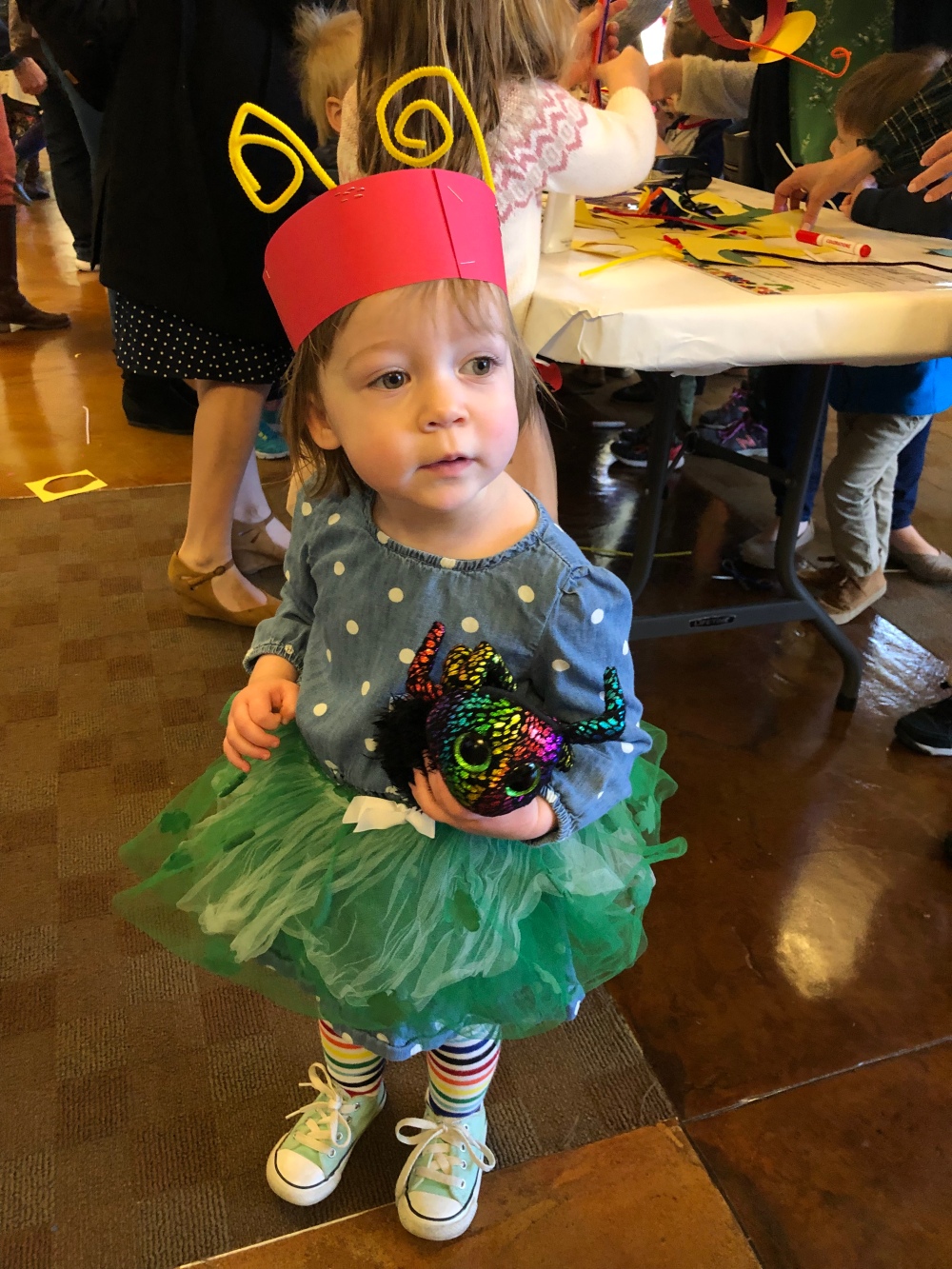 Even with a very active 2 year old in tow at a traditionally structured (think: in a large theatre, chairs in long rows, stage at the front, etc.)  show, the littlest audience members were welcomed and invited as they are! They were encouraged to participate (vocally!) in the performance (echoing “..and he was STILL HUNGRY!” during the performance of The Very Hungry Caterpillar, for example) and wiggly bodies weren’t made to leave the theatre. Some families clearly made a big deal out of the performance and arrived in their Sunday best while others arrived in their every day wear – both end of the spectrum and everything in between were invited to sit next to one another and enjoy a few minutes being whisked away into a world in our imaginations. We apparently had a similar idea as our friends and the littles arrived rocking their rainbows to celebrate the bright and bold illustrations Eric Carle’s books are known for.

The Theatre generally makes an effort to include and encourage attendance at performances from little ones and their families that may typically not have theatre shows as part of their regular repertoire for one reason or another. For those with special needs and/or sensory concerns there is one public performance of each production designated as a “Sensory Friendly Performance” where the audience members are “free to speak and move in reaction to the story being told on stage”. During these shows the performance volume is lowered and ushers will raise a light to indicate when something potentially exciting or disturbing is about to happen on stage. One (different) public performance of each production is also interpreted for theatre fans that are deaf or hard of hearing. Finally, families for whom tickets to a Nashville Children’s Theatre show might normally be cost prohibitive are invited to complete the Family Access Membership form where ticket and camp/class prices are reduced on a sliding scale based on a family’s income level.

Each program also offers Parent Tips and Show Information covering “themes for social and emotional learning”, “language”, “violence and scariness” and “potentially anxious moments” so you can make the most informed choice possible when choosing to take little ones to the theatre. The Theatre also invites you to connect personally with one of two staff members to discuss individual needs in greater detail. I love that as a parent/caregiver you can be cognizant of your littlest unique needs – particularly if they have recently undergone a trauma or challenging situation and are sensitive to specific things – and make fully educated decisions about what shows may work and what shows may be better to avoid thanks to this information.

I am already excited to consider enrolling Littlest in one of the Theatre’s summer camps for 4-5 year olds. The 2019 summer camp schedule features Drama Makers (described as an opportunity for students to play with their favorite stories and books “through theatre, crafts, song, and dance”) as well as a Mini-Camp focusing on Eric Carle! Just 2 more years to wait before Littlest is old enough to join the drama fun.

2019-2020 shows go on sale April 5th. Our family is most excited about both Snuggery productions – The Itsy Bitsy Spider (currently in high rotation during car rides and meal times at our house) and The Teddy Bears’ Picnic (who can resist an adventure with the Darling Bear family!).  Call the box office at 615-252-4675 (8:30 am – 4 pm Tuesday-Friday) or visit the website to learn more! Maybe we’ll see *you* at the theatre!

my first child was born in January 2017 . since then I've been navigating raising a fierce, independent, generous and sensitive feminist daughter in Nashville, TN . Raising Nashville shares our journey - and the journeys of those in our immediate village and our greater village around the world . View all posts by Alexandra Payne